You don't have any saved vehicles!

Look for this link on your favorites:

Once you've saved some vehicles, you can view them here at any time.

What Does the Maserati Logo Mean?

The Maserati logo is one of the most recognizable symbols on the roads near Red Bank or Colts Neck, and it’s not hard to see why! After all, their famous trident is just as visually striking as it is suggestive, and no other manufacturer offers anything approaching a likeness.

What does the Maserati logo mean? There’s no mystery here, as the trident design was directly inspired by the statue of Neptune in the Piazza Maggiore in Bologna. Like this fierce and ancient god of the sea, the Maserati logo is a symbol of power, vigor, control, and adventure into the unknown.

History of the Maserati Logo and Brand

The Maserati brand was founded in Bologna, Italy in 1914, but it wasn’t until 1926 that they started building their own vehicles from the ground up. It was then that the Maserati logo made its first appearance on a finished vehicle.

The origin of the logo design is well-recorded: One of the Maserati brothers was inspired to reimagine Neptune’s trident by the suggestion of Marquis Diego de Sterlich, a friend of the family. This event is purported to have occurred in 1920, but it would be released to the world outside with the launch of the Tipo 26, six years later. Today, you can see the same trident on your Maserati vehicle’s leather car seats, exterior paneling, and finishing features.

Although the Maserati headquarters would be relocated to Modena in 1940, this timeless symbol of Bologna had already become inextricably linked with the Maserati name and ethos. The company would continue to emblazon the trident on all of their vehicles, right up until this day!

A Deeper Look at the Maserati Logo Meaning

The Maserati logo meaning should now be as clear as day, but if you’re a true enthusiast, you might still have a number of burning questions about the imagery employed on their vehicles!

Today, the Maserati logo is usually depicted in a single color–dark gray. Depending on when and where it appears, the trident might also appear in white, on a background of navy blue, black, or one of several shades of gray.

What about the Maserati emblem? That’s right– on certain vehicles, you may encounter the trident displayed stridently in red, on a field of white and blue! Also referred to as the “saetta logo,” this brighter symbol adds another layer of symbolism for fans of this luxury brand to keep in mind:

Maserati of Central New Jersey Puts the Trident in Your Hands

Are you ready to experience the history and power of the Maserati lineup on the roads of Rumson or Deal? You’ve seen what these vehicles represent, so now it’s time to see what they can do. Compare the Maserati Levante vs. Porsche Cayenne, take a closer look at the Levante interior, or contact us online today! You’re just a few clicks away from a test drive you’ll never forget.

Continue the adventure with Maserati of Central New Jersey by researching your favorite Maserati models with our team and finding out where Maserati cars and SUVs are made! Or, jump straight into the action by checking out our new Maserati inventory today.

You don't have any saved vehicles!

Look for this link on your favorites:

Once you've saved some vehicles, you can view them here at any time. 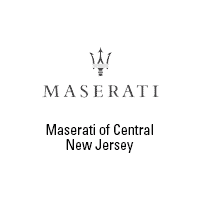